A black comedy for one actor loosely based on the true story of a meek and mild Austrian lady who disposed of her husbands one by one. 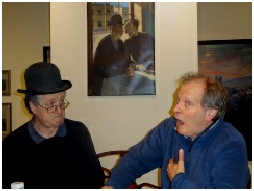 First performed at the Victoria Art Gallery in front of the Friends of the VAG in March 2014 and repeated in October for the volunteers of the VAG. As part of a double bill at the Mission Theatre, Bath March 2015.

Based on the Rex Whistler painting to be found in Bath’s Victoria Art gallery an attempt to discover what the two characters in the painting are actually talking about.

Based on Christopher Anstey’s book - the New Bath Guide

Performed at the Museum of Bath at Work

Based on the comic poem and the Thomas Rowlandson cartoons from the 18th. Century telling the tale of the Blunderhead family’s visit to Bath in the late Georgian period.  A revised version performed at the Mission Theatre, Bath in March 2015

Performed as part of an evening’s entertainment by Solva Amateur Dramatic Society (March 2011).  Performed in Bognor Regis in December 2011.

The consequences of chopping down a beanstalk and sending a giant’s body hurtling into people’s back gardens has repercussions that Jack and his poor mother never envisaged.  A Comedy.  For a cast of five or twelve.

based on ‘The Strange Voyage of Donald Crowhurst’

Performed as a Late Night performance at the Marlowe Theatre Canterbury.

A one man show about the failed yachtsman and his abortive attempt to sail around the world.

Runner up in the Cornish One Act Play Competition, December 2013.

Rehearsed reading performed at the Lion and The Unicorn Pub, Kentish Town, April 2014 by KDC Theatre Co. and then as part of a double bill by KDC in June 2014 at the Rosemary Branch pub in Islington.

Dinner a Trois – a play in three courses and each one deadlier than the last. 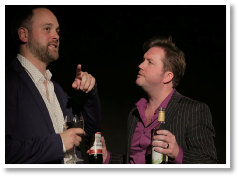 Winner of the first Cornish One Act Play Festival, November 2012.  Winner of the Segora One Act play Competition 2015 .

Michael Simkin, writer, actor and adjudicator wrote:  “Terrific structure and the interplay between them all, each offering their own compelling version of the truth, was perfectly carried off.”

George and Martha are living on a campus in the Mid-West somewhere and seem to have the ideal lifestyle, that is until Alice comes to call. Then they all have a take on what happened that afternoon. But who is telling the truth?  A simple setting with three armchairs (one should swivel) a drinks table and a few props.  A three actor (2f,1m) comedy with more than an acknowledgement to Edward Albee in the plot and text.

Was given a public reading as the runner up in Sterts One Act Play competition in March at the Sterts Studio, Cornwall.